Amman Aamir answered
Practically everybody has heard of or read stories about King Arthur and his Knights of the Round Table. They are not considered to be true stories, but legends. What are they based on?

Well, no one knows who. King Arthur really was. Most writers of history believe that there was a great chief of one of the tribes in Britain around the year A.D. 500, and the legends have grown up about this man. King Arthur may have been part Roman and part British, for the Romans had ruled England for nearly 400 years. Arthur probably led a large army against the Saxon invaders.

In both Wales and Brittany, Arthur was remembered .and admired. Stories about him were passed from one generation to another. Each story was more wonderful than the last. Finally, Arthur became one of the greatest heroes who ever lived. He killed horrible monsters, had great magical powers, and became a great and good king.Nobody knows for sure just where Arthur had his castle. There are about six different places in England that claim to be the location of Camelot, his home.

The first writer to mention Arthur was an early Welsh historian who lived about the eighth century. After that first mention of Arthur, nothing was written about him for about 400 years. Then in the twelfth century, stories about King Arthur became quite common. The earliest were written in Latin, and then French and English poets began to write about him.

Anonymous answered
Historians still argue about whether or not King Arthur really existed. One work describes him as fighting in a battle in the year 516 A.D. but the text is believed to have been written hundreds of years afterwards so cannot be regarded as reliable evidence that Arthur was a real historical figure. There are no references to King Arthur in documents dating from the 5th and 6th centuries, the time in which he is most often said to have lived.

Some historians believe that the story of King Arthur is largely a legend which may have been based on the actions of Ambrosius Aurelianus, a British king who lived in the 6th century A.D. and who is said to have fought against the Saxons, defeating them at the battle of Badon in 516, the same battle in which another source describes Arthur as having fought.

Other historians have claimed that the story of Arthur may have been derived from the life of a Roman knight called Lucius Artorius Castus who lived in Britain in the second century A.D.

Anonymous answered
I think King Arthur is real. He may was a Roman Knight, that is why he won a lot of battles against the Celtic. Because the Celtic mostly charged into battle naked, and hallucinated. With the Roman armor, he obviously can owned them in battle. And the Chivalry code, with the Feudalism in the Medival period pretty much was based on his Knights of the Table code of honor.
It is only my opinion.

Will Martin answered
The Arthurian saga we know from writers like Sir Thomas Malory, and films like "Excalibur" is certainly a myth. 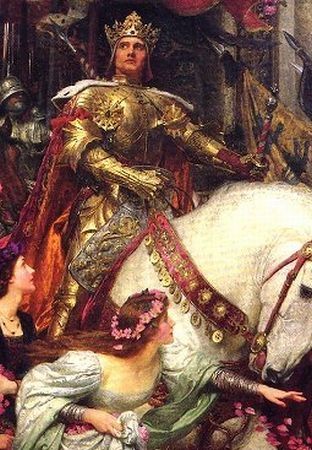 Elements like the magic sword, the Round Table and the Grail quest can all be found in old Celtic tales that contributed to the Arthurian story. However, there may well have been a real-life source for it. If the figure of King Arthur has any foundation in fact, the likeliest time for him to have lived is the early 5th century, after the Romans left and before the Saxon invasion fully took hold.

There are persistent legends from around that time of a British (Celtic) chieftain, trained in the Roman arts of war, who united the warring British tribes to fight off the Saxons. In fact one 9th-century historian firmly states that there was such a man, and his name was Arthur.

However, the era in question is so confused and its records so incomplete that the historian, Nennius, can't have been sure. There certainly was a chieftain called Ambrosius Aurelia-nus, who may be the source of the story. We shall probably never know for sure.

Anonymous answered
I once saw BOTH KING ARTHUR and CHUCK NORRIS at a coffee shop enjoying tea and bagels.

Anonymous answered
Yes although he preferred to be called susan on the grounds that he was a tranny!

Maryam answered
I once saw him at my house while riding his MAGICAL unicorn!

Meta Forrest answered
Yes he was the King of Wessex

Anonymous answered
Well,I know he exists--I saw him in a movie--They said it was Sean Connery playing a role but I know it was actually King Arthur himself. And everyone else here at the home agrees--

Anonymous answered
He is at the kfc