What Were The Worst Pandemics In History?

A pandemic is what happens when an epidemic gets a really good travel agent and starts to spread over a large region. The disease becomes as trendy and prevalent as the Macarena dance, affecting more of the population than was expected and spreading faster than experts expected. Throughout history mankind has been afflicted with a great many diseases, disorders and maladies that have made the jump to the big leagues and become pandemics, turning the other pathogens green with envy, or maybe that’s just gangrene. 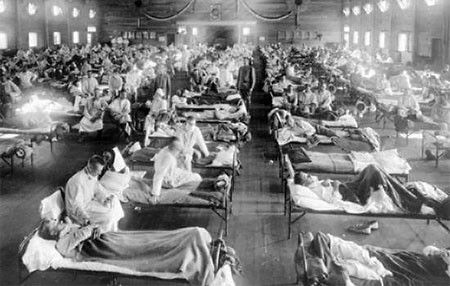 March 1918 to June 1920 saw the devastating effects of what is known as the Spanish Flu pandemic, which spread as far as the Arctic and remote pacific islands thanks to increase in global travel. The flu was an extremely virulent and nasty form of Influenza Type A, and differed greatly from most common influenza viruses, the one that keeps us home every winter under a pile of blankets, subjected to hours of daytime TV.

The Spanish Flu’s victims were mainly healthy young adults, and the handful of scientists who are crazy enough to dabble with samples of the deadly strain state that this vicious virus kills via a cytokine storm. No, that’s not an internal weather system with thunder and lightning, it means that the virus hijacks the host’s immune system and sends it into overdrive, killing the very body it was sworn to defend. Children, the elderly and infirm, having weaker immune systems, were far less likely to die when their own bodies went on a suicide run.

The symptoms were much like the common flu, until the second wave hit and the newly mutated virus began to cause hemorrhaging from mucous membranes, specifically the nose, stomach and intestines. Now it had added Ebola like symptoms to its repertoire, the bug was even nastier. Most victims died of bacterial pneumonia, a complication of the flu, though some died directly from the virus as it caused massive hemorrhaging and edema of the lungs.

During the outbreak, nearly a third of the world’s 1.6 billion people became infected, and 50-100 million died from the ravages of this flu bug from hell. That means that 3-6 percent of the world’s people went from walking, talking members of society to “the dearly departed” in just over two years. Once infected, 2-20% of the victims died, compared to the standard influenza’s mortality rate of .01% 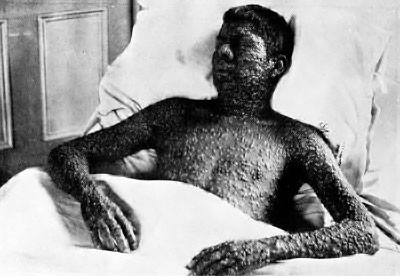 First seen in human beings around 10,000 BC, Smallpox got its current name to differentiate it from the Great Pox, also known as syphilis. It’s a sure sign that you’re living in dark and difficult times when society has a need to categorize their poxes. With outbreaks that have spanned much of human history, the worst pandemic was in the 18th century, when this nasty disease with the cutesy name spread throughout the known world.

Symptoms started with a high fever, aches and nausea, but soon the tell tale rash would appear in the mouth, spreading as the skin became covered in pustules that raised, crusted and scabbed, leaving a pitted scar on most survivors and leading to the creation of the word “pockmarked”. One can only pray that Pocky candy was inspired by something less horrific. 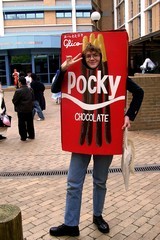 If you survived the infection, fevers and body wracking destruction, it would take weeks for the painful rash to completely heal. Other complications included blindness, severe scarring and limb deformation caused by arthritis or infections within the bones themselves.

By the 18th century smallpox was present in every major European city, killing 5 regents, 400,000 people a year and was responsible for a third of all blindness in that time. The fatality rate was up to 60% for adults, and 80% for infected children. By the mid 18th century Smallpox was high on the list of things that would snuff out your life like a candle. It was prevalent everywhere but several isolated islands and Australia, suggesting that either kangaroos are magical pox repellents, or one of the world’s nastiest viruses didn’t want to go to a country where even the trees can kill you. Over the course of the 18th century, more than 60,000,000 people died of the disease.

Smallpox has the singular honour of being the only disease so universally feared than mankind banded together long enough to come up with a vaccine and kick it to the curb like last month’s leftovers. The ones you left in the fridge, forgot about and had nearly gained sentience. The World Health Organization ruled that the disease had been eradicated in 1980, after a 13 year vaccination blitz that spanned the globe. Well, it is almost eradicated, because there are still samples of the virus carefully tucked away in two labs, just in case. 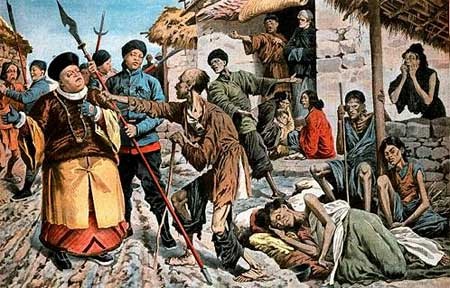 An infection of the small bowel caused by the bacterium Vibrio cholerae, this diseases started off in the Indian subcontinent, and it is believed that the River Ganges was its birthplace.

Cholera can kill within hours, wreaking havoc on the host’s body with a speed normally reserved for sugar hyped toddlers and hummingbirds on Speed. One of the fastest killing illnesses known to man, its primary symptom is near continuous, exhaustive and literally draining bouts of diarrhea, which can cause the infected to lose nearly a liter of water an hour. Far beyond curative abilities of Pepto-Bismol’s magical pink powers, Cholera acts like an internal dehydrator, stripping vital fluids from the body faster than an ex-lax spiked chocolate cake at a birthday party. The transformation from person to raisin can lead to death by dehydration as the kidney’s shut down and the body’s organs fail. The untreated fatality rate is 50-60%, whereas it is 1% when medical attention can be promptly obtained.

There have been seven pandemics of Cholera that have claimed millions of lives, five in the 19th century and two in the 20th century, the last one being 1961-1970. The third pandemic was the most brutal, claiming more than a million lives between 1852 and 1860 when it finally died out. In London alone 10,000 people died, and in Russia the death toll topped one million. Starting in India, this pandemic spread quickly and soon was wreaking havoc and misery in Europe, Asia, North America and Africa. 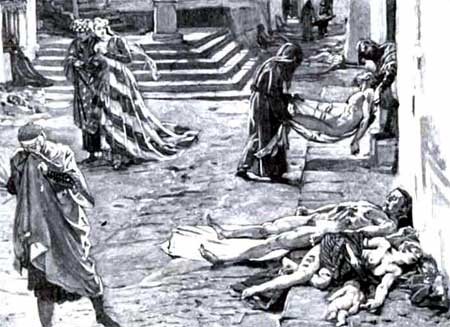 Now this is a disease with a good public relations team. No cute name, no hard to pronounce Latin, this killer had “just the facts ma’am” levels of description compacted down to two words.

Believed to have started in Central Asia, by 1346 it was spreading via merchant ships to blanket all of the Mediterranean and Europe in a blanket of terror and death that peaked in 1348-1350 AD. During the pandemic, the Black Death killed between 30% and 50% of the population of Europe, taking down the world population by roughly one hundred million people by 1400 AD and creating unheard of opportunities for career advancement if you managed to avoid dying. Infrastructure collapsed, fear ran rampant and famine claimed many more lives as those who grew and sold the food fled for remote villages or died in their beds.

The disease has several variations, demonstrating that Mother Nature is not only a bitch, but a bitch who likes to spice things up with a little variety.

The most common form was the Bubonic plague which brought with it high fevers, aching joints, vomiting and headaches, along with the characteristic formation of buboes. These buboes were hot, hard lumps that appeared in the neck, armpits and groin and caused considerable pain as they bled and oozed more pus than your standard zombie slasher flick. Those who spend their time knee deep in gory descriptions of age old suffering believe that the name “Black Death” comes from the fact that before the victims died, their skin would turn a striking shade of purplish black from hemorrhages under the skin, while the extremities would darken from gangrene. Mortality rates for this version ranged from 30%-75%, meaning if you had to dance with the devil, this was the disease you wanted to see on your dance card.

The Pneumonic plague was also part of the Black Death pandemic, and had a mortality rate of 90-95%. Instead of buboes, the plague was airborne and attacked the lungs, causing the victim to trade the whole breathing air option for the far less desirable option of drowning in your own blood until death freed you from this terrible suffering.

Septicemic plague was the least prevalent form of the plague, but the most virulent. With an almost perfect kill ratio of 99% it occurred when the bacteria infected the bloodstream instead of the body or lungs, hitting fast with excessive bleeding, high fevers and death occurring before buboes could even form, though purple skin patches often appeared in the short time the victims lived. Septicemic plague can even kill before outward symptoms manifest, as internal organs fail from the massive blood based infection.

To this day the identity of the contagion that caused this deadly ailment is unknown, as it passed out of the world and into history after a final outbreak in 1551, fading away like a washed up 80’s sitcom star.

Sweating Sickness or the “English Sweate” first appeared in 1485 in the reign of Henry the VII, and appeared again in 1502, 1507 and 1517, each time killing large portions of the population of England. Symptoms were described as coming on swiftly, starting with a sense of apprehension and unease just to set the mood, and soon followed by cold shivers, giddiness, great exhaustion and severe pain in the neck, shoulders and limbs. The shivers could become quite violent, and the entire phase lasted 30 minutes to 3 hours. Once the cold shivers subsided, an equally unpleasant stage of heat and sweat began, accompanied by delirium, terrible thirst and heart palpitations. The victims would then collapse in exhaustion or succumb to a near irresistible urge to sleep from which many of them never awoke. Death usually took no more than 18 hours, and could come as quickly as 3 hours after the first symptoms appeared. As an added bonus, infection did not grant the survivors any immunity against the mystery malady, and many suffered through more than one infection.

In 1528 the worst outbreak occurred, starting in London and over the course of the next year spreading across Eastern Europe, though it never appeared in France or Italy. Within two weeks, the infected area would see a peak in the disease, a large number of victims would perish, and then the illness would disappear. Though not on the same scale as the Black Death or Cholera, this pandemic did bring the workings of King Henry VIII’s country to a stand still as people fled in fear from London and other populated areas, including the King himself, who disbanded his court and moved residences constantly to avoid contracting the contagion. Agriculture stopped, and famine set in as people lived in terror of this fact acting and randomly appearing disease.

wilbert u can call me sue answered
I guess the great plague in Europe at the turn of the century. Before antibiotics were discovered. Now it is merely a question of getting pills or a shot. There was the black plague, you can read the book by Albert Camus, as well as the pox, in scotland which we now refer to as syphallis and easily treatable. The plague still exists, but thanks to anitbiotics, we are able to cure before it becomes deadly. Also, the flu, just before the Russian revolution which spread worldwide, nurses covered their mouths, but not their noses, hence the spread, and typhoid, I am sure you have heard of typhoid mary, she worked in the food service industry, and though she never got, was a carrier, so spent the last 50 yrs in isolation. Egads. There are so many pandemics, AIDS in the 80's which is still epidemic porportions in third wolrd countries, the list goes on and on