When Did The World Come Closest To World War III?

Christopher answered
Many historians believe that the Cold War between the capitalist United States and the communist Soviet Union, lasting from 1945 until 1989, was effectively World War III, since this conflict risked spilling over into the most devastating bloodshed ever known to humankind and it also spanned the entire world. The US and the Soviet Union each had a network of allied countries in Europe, Asia, Africa and the Americas, which meant that no corner of the world was completely immune from the risk of nuclear attack. During the 1950s and 1960s, children in American and Canadian schools had to climb under their classroom desks during emergency drills, in preparation for a Soviet nuclear attack. 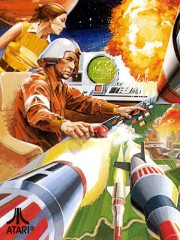 The closest that we ever came to World War III was during the Cold War period, when any number of events could have triggered a nuclear conflict. Perhaps the closest call came in April 1961, during the American Bay of Pigs Invasion and the Cuban Missile Crisis that followed. The Bay of Pigs was an attempt on the part of President John F. Kennedy’s administration to overthrow Cuba’s fledgling communist government, led by Fidel Castro. As a clear sign that a Democratic president could be just as vociferous in his anti-communist and anti-Soviet attitude as a Republican,
Kennedy ordered Cuban exiles to attack their home country, in an effort to dislodge Castro’s left-wing and hostile government.

The Bay of Pigs

In many ways, Kennedy was following up on the policy of his Republican predecessor, President Dwight. D. Eisenhower; under Eisenhower’s rule the CIA had gathered information on Cuba that could be used during a potential amphibious attack on the communist country. Once Kennedy had taken over in 1961, the CIA decided to take even more concrete steps in laying the groundwork for an invasion of Cuba. The so-called Cuban Revolutionary Council was established in Miami, Florida and this group included not only regular exiles, but high-profile leaders, such as the deposed Cuban Prime Minister José Miró Cardona. 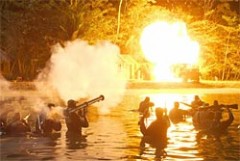 The Bay of Pigs invasion started on April 15, 1961, when US military aircraft bombed major airfields in Cuba, in order to “soften” the island nation ahead of a land invasion. The planes even bombed Havana’s Antonio Maceo Airport, which served as the main point of entry for international flights. Not surprisingly, Fidel Castro’s government quickly turned to the United Nations and issued a formal complaint, after the American attacks. At first, Adlai Stevenson, the US ambassador appointed to the UN, claimed that the American administration had nothing to do with the attacks and that these had been organized independently by Cuban nationals who aimed to overthrow Castro’s communist regime. Stevenson, however, had been misinformed—the Bay of Pigs invasion had indeed been led by the CIA and American authorities.

The US launched a major military operation in Cuba on April 17th, 1961, when 1,300 Cuban exiles—mostly from Florida—joined forces under the banner of Brigade 2506 and attempted to invade the island nation from the sea. The Cubans, however, found out about the early morning Bay of Pigs invasion and landing, and several military aircraft began bombing the American ships, in order to halt the attack. The Americans only succeeded in landing around 270 troops on Cuban soil and as many as 180 of these recruits are believed to have drowned during the attack. Four US air servicemen were also killed, as well as anywhere from 2,200 to 5,000 local Cuban casualties. The precise number is still impossible to determine, due to wildly contradictory statistics published by Cuban exiles and the Castro regime.

The invasion continued for three days, but ended in failure. This served as a major blow to the credibility and international influence of the Kennedy administration, very early on in the president’s term. The CIA’s top leaders, including Director Allen Dulles, had no choice but to submit their resignation. 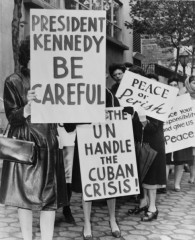 Few can deny that the failed invasion of Cuba and overthrow of the communist regime made Castro even more anti-American and pro-Soviet. This played a major role in the Cuban Missile Crisis, which not only served as round two of the hostilities between the two countries, but drew in the Soviet Union. The threat of a nuclear world war loomed larger than ever when the Soviets placed missiles on Cuban soil, thus allowing them to easily attack the US. The Soviet presence was justified by a secret plan devised by the Kennedy administration in 1961 to sabotage and ultimately remove Castro from power using covert means.

These plans, along with the recent Bay of Pigs invasion, led Castro to turn to Soviet leader Nikita Khrushchev, in order to help protect his regime from what he believed was an imminent American attack. In September 1962, Khrushchev decided that the US did, in fact, threaten communist Cuba and he decided to place nuclear missiles on the island. In October 1962, the Soviets began building the military bases and installations that would house these missiles. For a two week period, the possibility of a nuclear war seemed very real, especially after American reconnaissance flights discovered that the Soviets had begun the construction of bases. Kennedy warned in a speech on October 22, 1962, that if a missile based in Cuba is ever launched against a country aligned with America, Washington would automatically hold the Soviet Union responsible and would follow up with military retaliation. By saying this, Kennedy effectively pointed out that a worldwide nuclear conflict could erupt at any point. The Kennedy administration considered various options when formulating its response to Soviet actions in Cuba, including diplomatic negotiations. But the two far more likely options included a full military blockade—usually referred to as a “quarantine” of the island nation—or a military strike, which would have surely provoked a tough Soviet response. 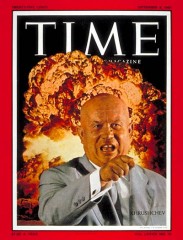 The situation, however, was defused within two weeks, after both the Americans and Soviets realized that they were playing with fire. But the Soviets were only willing to halt their Cuban missiles program if the Americans agreed to concessions as well. In the end, Kennedy confirmed that his government would not attempt to overthrow Castro’s regime and—more importantly—the US dismantled missiles that it had placed in Turkey.

These negotiations may have stopped a nuclear war from breaking out, but what many people do not realize is that it is not always up to high-ranking politicians or diplomats when it comes to deciding between war and peace. Sometimes “ordinary” people on the ground are the ones who determine the course of events and this may have occurred during the Cuban Missile Crisis. According to one account, a Soviet submarine was submerged off the shores of Cuba where it had become surrounded by US marines. The submarine would have desperately needed to rise above the water, as oxygen levels were running dangerously low. As such, the captain called on the submarine’s staff to launch its nuclear torpedoes against the American warships that had surrounded it and the only thing that stopped the crew from doing this was opposition from the Soviet political officer on board, who felt that this was a dangerous idea. As such, it can be argued that a relatively unknown and low-ranking officers locked in a submarine deep under the ocean on October 26, 1962 were the ones who held the whole world’s fate in their hands and helped avoid a third world war.